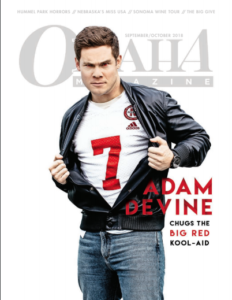 Publisher Todd Lemke grew up in Papillion, Nebraska, and graduated from University of Nebraska-Lincoln in 1981 with a degree in journalism. Two years later he started a magazine called Omaha Today, which helped to springboard a 35-year career in magazine publishing. Omaha Magazine, under Todd’s leadership, focuses on the people and the positives that make Omaha a great place to live. Those positives include the philanthropic and cultural events around town as well as the abundance of business opportunities. Todd credits his staff with creating an award-winning magazine that has been recognized with regional Great Plains Journalism Awards, state AIGA (American Institute of Graphic Arts) awards, and local Omaha Press Club awards.

Omaha Magazine is active with events in the community. They do launch parties, FACES of Omaha, Best of B2B and Soiree A Night of the Best.

Omaha Magazine sees contract publishing, native advertising and digital as the their largest areas of growth and expansion in the future.

As the largest magazine publisher in Omaha, it is their passion to tell the stories of our great city—its people, institutions, businesses, and nonprofits. They started at least a dozen publications over Todd’s 35 years in this fascinating, fast-paced industry. Their current core of six titles is led by their award-winning flagship product – Omaha Magazine. Todd says, “It is an honor to be even a small part of weaving the common thread that becomes the very fabric of our wonderful community.”